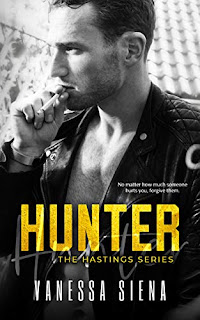 Summary: “We’re not book smart, but street smart.”
Words my brother lives by. Jagger has always been my hero, my protector. He packed up our things one day and took us far away from our abusive, alcoholic father. He knew it was only a matter of time before he killed us.
So we left, and since the very beginning, my brother has done everything to keep me safe.
But not even Jagger can keep me away from his best friend.
Hunter has had a rough life like us, and some might say, he’s had it even worse. He’s impulsive, troubled, and has anger issues, but I see the man he is inside. He’s a survivor, and the more we grow closer, the more I know we are meant for each other.
But Hunter is keeping secrets from me…
To make matters worse, our father shows up and our life quickly spirals out of control.
Violence knows no bounds when it comes to this vile man and this time, I am not sure anyone will be able to protect me.
Author: Vanessa Siena
My Rating: 4/5
Find it on Amazon. Click HERE.
*The author sent me an ARC for an honest review.*

"Hunter" is the first book on the "Hastings Series" by Vanessa Siena. It's a romance  novel about Harlow, a college working girl, who lives with her brother, Jagger. She tries to make her life better and forget the past. Hunter is her brother's best friend and one day the things between him and her change.
The story is really interesting and unique, and it isn't all about the relationship between Harlow and Hunter. The main narrator is Harlow and this is very helpful, because it's is easier to understand her feelings and her thoughts. Some chapters are narrated from Hanter's point of view, but these chapters appear later in the book. So the mystery behind his behavior remains until we learn things about his past.
Harlow is a strong and independent young woman, despite all the bad things that happened during her childhood. The way she interacts with her brother is sweet and it shows how much they care for each other. With Hunter things are more complicated, because of his mood and his behavior swings. The author manages to built the characters' background and to explain, why they are acting like that, especially Hunter.
All in all, is a well-written book that I enjoyed reading it. I wanted the story not to end, but this is the first book on the series, so this isn't really the end.
- Ιανουαρίου 15, 2020