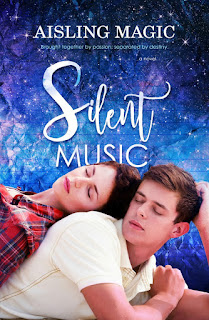 Summary: Brought together by passion; Separated by destiny. She’s his muse. His love. His inspiration. And he refuses to let her go. For nearly two years, Kai Eastwood has watched Phoenix Banks lost in a state of coma. Singing the songs they wrote. Remembering the moments they spent together. Missing the kisses they shared. Holding hope. But how long can hope be held when, with each new day, Phoenix slips farther away? Maybe this time When the music fades, And the silence invades, Their song will begin.
Writer: Aisling Magic
My Rating:
**An ARC was sent to me for an honest review.**
You can buy it here.


"Silent Music" is a romance novel by Aisling Magic and it's about the bittersweet love story between Phoenix and Kai.
The story line is really good and it contains some very intense scenes. It is a book full of emotions: love, anger, happiness and sadness. We read the story from both Phoenix and Kai's perspective and that makes it even more interesting, because we have the chance to learn the thoughts and emotions from the two main characters. The book is divided in two parts and I liked more the second one, but that doesn't mean that the first one wasn't good.
Phoenix and Kai are characters that you like after reading the first chapters. Madison, Phoenix's sister is one of the side characters that was fun and with an eccentric personality.
All in all, "Silent Music" is great romance novel. You should read it, if you like epic love stories.