Devourers from Suryaksh: Race to the Last Eventuality (Book Review) 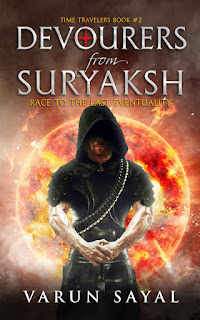 Summary: She makes people dance around the fire ...
... before she kills them in cold blood.
No one knows her true origin. Time readers can't read this ruthless telekinetic, who snaps necks with a mere hand gesture.
Tej, once a simple villager, now a time traveler, is pulled into conflict as she attacks him in 3057 BC, hunting for his friend. Dead bodies of his loved ones pile up as she ravages through his village. Intending to seek justice Tej races against time itself to fight her: an entity so vile, even her own kind fear her. But can he do this alone?
Traveling to the futuristic world of robotic armies and virtual realities, Tej builds questionable alliances. It's a matter of not 'where' but 'when' can he battle his enemy. If he loses, humanity may never regain its freedom - but winning may cost the ultimate price.
Author: Varun Sayal
My Rating: 4/5
You can buy it here.
*An ARC was sent to me by the author for an honest review.*


"Devourers from Suryaksh" is the second book by Varun Sayal in the Time Travelers series. It's a science fiction story about Tej, a time traveller who has to defeat an enemy with great powers. He can't do this alone and he needs some allies.
The storyline is complicated, because there are a lot of travels through time and multiple timelines. But the way the book is written helps the reader not to get confused. It has action scenes that are described really good, suspense and some plot twists. Tej is the ideal main character. He is brave, faithful and fearless. He cares for his people and he believes in justice.
All in all, you should read "Devourers from Suryaksh", especially if you enjoy sci-fi and dystopian books.